Following last year’s unanimous legalization of medical cannabis (166–0 in Parliament), the Thai government immediately invested in the medical cannabis education, research and cultivation, becoming the number one pro-cannabis country in the region. According to experts, the local cannabis market is expected to reach a value of USD 700 million within five years.

This year, Thailand has built the biggest industrial-scale medical cannabis facility in Southeast Asia. This facility in Chiang Mai has 12,000 plants under cultivation and the university researchers therein develop strains with an equal ratio of THC to CBD.

New Thai Minister of Tourism and Sport, Pipat Ratchakitprakan, has high hopes for the economic benefits of cannabis tourism. “We would like to provide medical tour packages, such as detox, Thai massage and other wellness procedures using cannabis,” he claimed in July on his first day in the office. His goal is to develop “high-quality tourism” for affluent visitors from Europe and America. 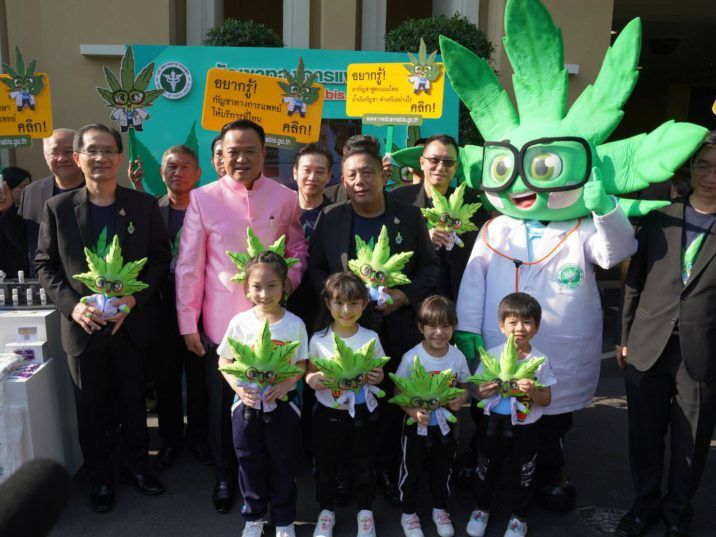 Prime Minister Prayut Chan-o-cha in the presence of Dr. Ganja and children with their own Dr. Ganja dolls. Photo courtesy of Bhumjaithai Party.

And the good news continues: on December 11, Thai Prime Minister Prayut Chan-o-cha announced the launch of the government’s medical cannabis education site. He praised cannabis as a potential treatment option for low-income people in particular, and even personally demonstrated the use of cannabis oil.

The government is investing in medical cannabis industry as well as education to offset future healthcare expenses, including treatment costs.

According to recent draft legislation by the ruling party, Thai citizens will be allowed to grow up to six cannabis plants for personal use “in their backyards like any other herb”. Cannabis has long been a traditional part of Thai cuisine and medicine as well as leisure time activities: after all, the word “bong” comes from Thai.