In recent years, there has been a furor over cannabidiol, more commonly known as CBD. It has taken the spotlight away from its cousin tetrahydrocannabinol, or THC, the most famous cannabinoid, which we introduced in our previous issue.

CBD is one of more than one hundred cannabinoids, resinous compounds found mainly in cannabis flowers and in smaller amounts in its leaves. Cannabidiol has one huge advantage in comparison with THC: it is not considered a narcotic nor psychotropic substance.

Manufacture and use of products containing CBD is generally legal today, with a few exceptions. Countless companies are taking advantage of this to offer a plethora of CBD products on the world’s marketplaces.

Cannabidiol first attracted the notice of scientists more than 60 years ago. Its breakthrough discovery took place in 1955 at Palacký University (later also the alma mater of cannabis researcher Lumír Hanuš) in Olomouc, Czechoslovakia.

The scientific team there isolated and identified cannabidiolic acid (CBDA, the substance which turns into CBD via a process called decarboxylation) and also demonstrated its antibacterial effects. In 1979, the Australian team led by B.E. Belgrave proved that even fairly high doses of CBD have no psychotropic effects on humans.

Science has made leaps and bounds since then. New studies demonstrating the wide spectrum of physiological and medicinal effects of cannabidiol on animals and people have been popping up like mushrooms in recent years. In conjunction, the number of products containing CBD are multiplying. 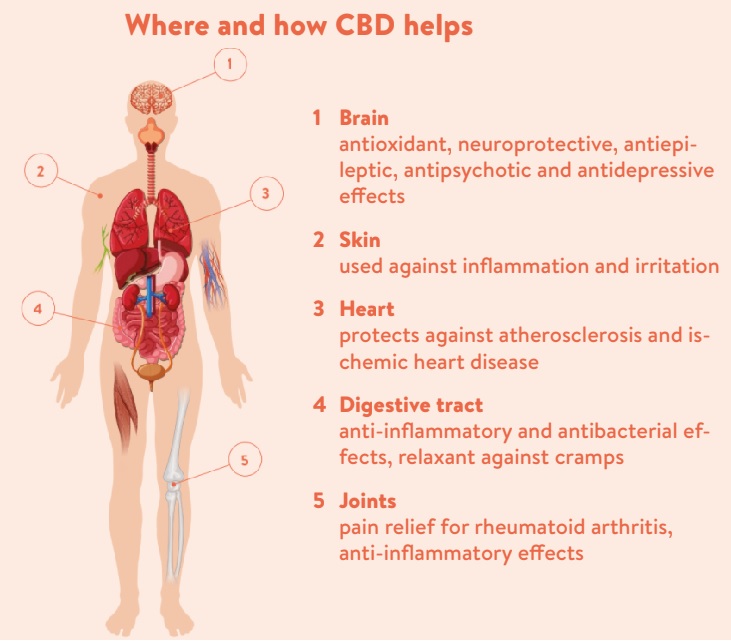 And anyone who has visited a cannabis trade fair recently has even encountered high CBD content buds, which are indistinguishable from the standard (and in the majority of countries, illegal) strains with more than 0.3% THC. There is a huge boom in CBD drops and oils, e-cigarette liquids, cookies, honey and coffee – not to mention massage oils and many other cosmetic and food products.

Of course, in addition to foods, food supplements and cosmetic products, pharmaceutical companies with patent medicines are also entering the market. One example is Epidiolex from the British company GW Pharmaceuticals, which contains an extract of 98% CBD, and was recently given the first ever approval of a cannabis-based drug in the USA.

The fact that CBD is legal does not explain its ever-growing popularity alone. Cannabidiol, after several decades of research and a few years of clinical use, has shown that it is rightly considered one of the most universal and at the same time safest medicinal substances of vegetable origin.

It is crucial to carefully choose products from trustworthy manufacturers.

Studies have proven its ability to reduce the symptoms of many serious and chronic illnesses – among them: obesity, epilepsy, dystonia, diabetes, cancer, Alzheimer’s and Crohn’s disease, arthritis and multiple sclerosis. CBD also works effectively against anxiety, so it is successfully used for example in treating post-traumatic stress disorders.

Its antibacterial properties protect against infections and help manage inflammation. In its acid form, cannabidiol is effective against staphylococci and streptococci.

CBD also has antioxidant, neuroprotective and anti-inflammatory properties. Studies have shown that it is a more powerful antioxidant than ascorbic acid (vitamin C) or tocopherol (vitamin E). It is physiologically effective however with dosages lower than 20 milligrams per day. 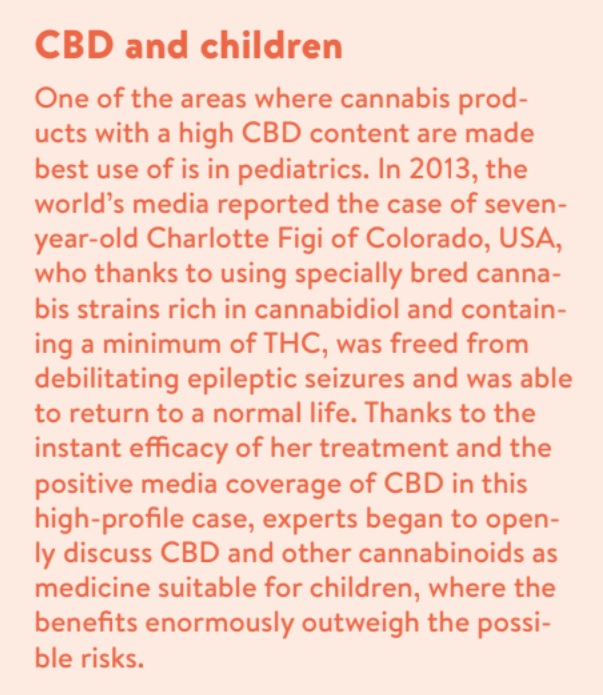 And that is another one of the reasons for its rising popularity. People who are seeking out CBD products include patients with serious illnesses as well as those who just want to keep their body and mind fit, whether they be seniors, sportspeople, or top managers.

So far, putting CBD products on the European and world market is not clearly regulated, especially in terms of its sales via Internet. Not all manufacturers openly declare the contents of their products, the method of CBD extraction, nor the concentration of their active ingredients.

Some CBD oils or drops can for example contain a trace amount of THC. There is nothing wrong with that, in fact a number of studies have shown that when CBD works together with other substances naturally found in cannabis, whether they be cannabinoids like THC, terpenes or phenols, it increases the effectiveness of the drug. 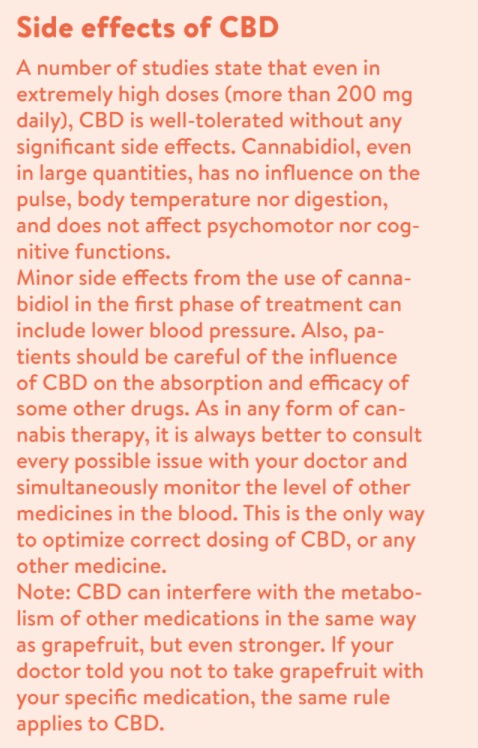 In addition, CBD dampens the psychotropic effects of THC. Those who are sensitive however might be surprised by a slight psychoactive effect of such products and may even fail police or employer drug tests.

Another risk can take the form of poor-quality extraction or extraction via solvents deleterious to one’s health, or low-quality starting material (cannabis plants), producing end products which may contain heavy metal residues or even mold. This is why it is crucial to choose products from trustworthy manufacturers who openly declare their origin and ideally even provide lab analyses of their product. This is the only completely safe way to use CBD products for your health. 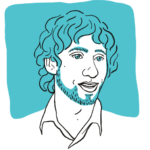