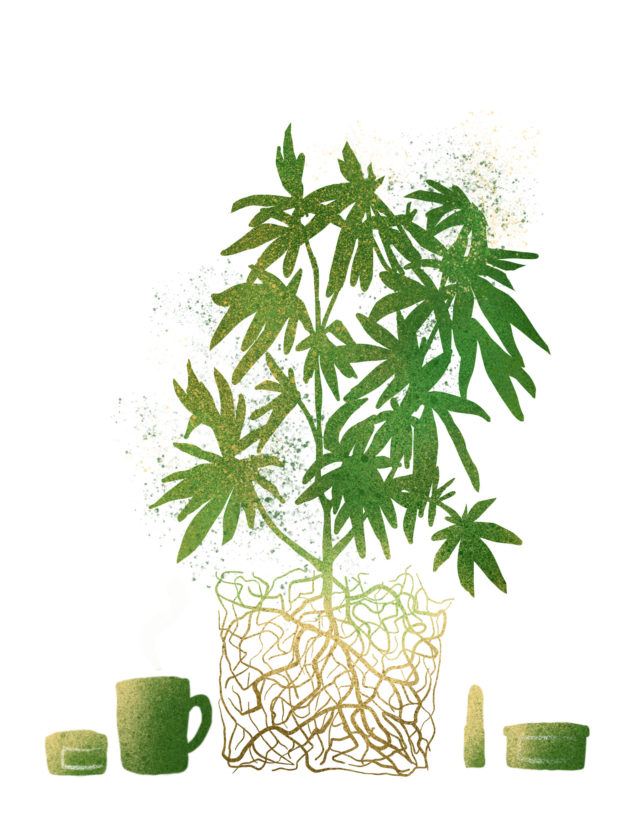 While at present cannabis treatment has taken into account only the effects of the cannabinoids and terpenes found in cannabis flowers (buds), it is often overlooked that the power of the entire plant comes from its roots, which hold many surprises. When reaping your harvest this year, do not forget the roots! – and be sure to carefully preserve this underground treasure.

Back to the roots

In the oldest Chinese herbal atlas, attributed to the mythical sage Shennong, hemp root is praised as an effect painkiller, and it is said to have been used already in the 3rd millennium BCE. In the form of dried powder, it can be mixed with fresh juice from the leaves of the same plant into a paste which is used to treat fractures. The root extract was a favorite of midwives, for it helps stanch the bleeding during difficult births and also regulates the hormonal cycle.

The ancient Romans used an infusion of the underground portion of the plant internally to relieve cramps, joint pain, and inflammatory arthritis. For centuries in European medicine, it was recommended especially for musculoskeletal pain, and for gout and rheumatism. It was used in treating sexually transmitted diseases, digestive problems and infections. In India, applying an infusion of hemp root and leaves is still a popular remedy for burns, skin inflammations, eczema, and hemorrhoids.

Against pain and cancer

In addition to other substances, hemp root contains friedelin and epifriedelanol, which have exhibited promising anticancer effects in several scientific studies. It also contains pentacyclic triterpenoids (PCTs), which support the apoptosis process (targeted cell death) of cancer cells and also fight inflammation. Friedelin also reduces pains and fevers. There are also trace amounts of alkaloids – especially choline, which can help with menopause, and atropine, which can relieve breathing problems.

Against pain and cancer

In addition to other substances, hemp root contains friedelin and epifriedelanol, which have exhibited promising anticancer effects in several scientific studies. It also contains pentacyclic triterpenoids (PCTs), which support the apoptosis process (targeted cell death) of cancer cells and also fight inflammation. Friedelin also reduces pains and fevers. There are also trace amounts of alkaloids – especially choline, which can help with menopause, and atropine, which can relieve breathing problems. Hemp root contains only a minimal amount of cannabinoids, not enough to alter one’s mental state, so the extract can be safely taken at any time during the day.

How to prepare hemp root

After harvesting the plants, carefully remove the roots from the still damp and loose soil with a trowel, trying not to damage them. If the soil is hard, water it several hours prior to removal. Then shake the largest pieces of soil from the roots and cut the stem about 3cm (1¼ in.) from the start of the roots, so as to keep them as one whole. Thoroughly wash the entire root system with lukewarm (never boiling hot nor icy) water. Place the hemp root in a dry and dark place and let it dry out for about a week. Then delicately clean the dried roots of their last dirt with a toothbrush and finely chop them or pulverize them in an electric herb mill. Store your hemp root in an airtight container in a dark, dry place.

Tip: You can add dried hemp root to cannabis cremes and tinctures in order to increase their effects. Place fresh or dried hemp root into a canning jar, pour the rubbing alcohol over it, seal the jar and store for at least one month in a dark place. During the first week, thoroughly shake the jar every day; then afterwards once a week. The leftover solution can be replenished with fresh rubbing alcohol. And you can also add a few dried buds to the jar in order to increase its potency. This is a proven homemade liniment which can be used on sore tendons, joints and muscles. Do not use on open wounds nor sensitive skin.

CANNABIS THERAPY Magazine is a new global platform for cannabis patients, doctors, pharmacists and activists. Its aim is to help educate patients and seniors who use cannabis to alleviate their health problems, as well as inform various health professionals who wish to keep up with the changing times.